If you haven’t watched the Uncle Drew series starring Kyrie Irving, and more recently featuring Kevin Love and Hall of Famer Bill Russell, you need to because as Russell reminds Uncle Drew, This game always has, and always will be, about buckets.

A look at the move (here at Vantage Sports, we call these “post-acquisition moves”) just prior to a shot attempt yields insights into how to get buckets.

Looking at the most frequently used post-acquisition moves, we can see what the average field goal percentage is after a certain play is made.

Clearly, the best option is a catch and shoot scenario, but let’s dive a bit deeper into the data.

The Moves of Diminishing Returns 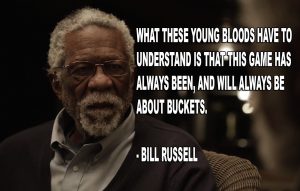 Which Move Is the Best?

Like in other studies, the more frequent observations help make up more of the average, so without consideration of the number of observations of a particular move, the top moves that result in the highest field goal percentage, excluding fast break and catch and shoot opportunities for both the 2 PT and 3 PT options, are as follows:

Keeping in mind that jump stops and 2 jab steps combine for less than 2% of the total number of three point field goals in our sample, it is clear that ball screens are the most optimal post acquisition move for creating a high percentage 3 point shot.

The Euro step has broken into the game in a big way and the numbers show why as it is more effective than straight drives, jump stops or spins.

This data show just how hard it is to get buckets in the NBA when attempting to create one’s own shot.