Before Paul George broke out as an offensive force, he was widely known for his suffocating defense. But is he a good enough defender to make shooters miss wide-open threes? 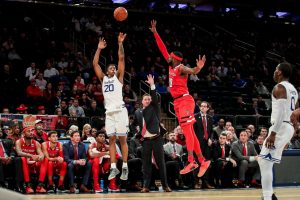 That was a trick question. Of course not! This video is not an example of good defense but rather Paul George getting lucky that an open shooter missed a wide-open shot.

In a previous article, I developed a framework for calculating defensive XPPS based on Ian Levy’s Expected Points per Shot. Let’s apply this method but focus specifically on three-point shooting and determine which players are getting lucky. Have Paul George’s opponents missed a ton of open shots?

In order to understand what constitutes an open shot, let’s revisit some of Vantage’s definitions for shot defense.

Altered shot: Defender is within 3 feet of shooter and hand is up. Offensive player must change shooting angle or release point while in the air.