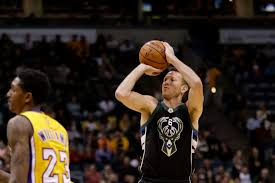 These are likely some of the decisions going through players’ minds when they decide to shoot, even if they don’t realize it. The last example is particularly interesting because it gets at the crux of shot selection: the player has an open mid-range shot, but is it worth passing that up to get a potentially contested shot near the basket later in the shot clock?

There’s been previous research into whether teams should be shooting early in the shot clock. However, we can take this a step further and look at the shot defense faced. WARNING: this will be a lengthy exercise but there will be a number of visuals to help you along.

As we can see in the graph, the earlier you can shoot in the shot clock, the more likely you are to make the shot. This is true for basically all forms of shot defense (the exception being altered, where the sample size is pretty small and filled with bad shots taken after shot-clock resets often in desperation). Is there a particular reason for this? Certainly, we can posit that players rush their shots at the end of the shot clock, which may lead to the diminished FG% (labeled Panic Room in the graph). However, what about the increase in FG% even as we get away from the “late in the shot clock” area? Well, one reasonable assumption is that players who shoot early in the shot clock are likely in transition (labeled Transition in the graph). It could be that a majority of the open/guarded/pressured shots that are being taken early in the shot clock are shots that are close to the basket causing a higher FG%. But what about the contested shots? Whether the player is in transition or not, a contested shot has a lower chance of going in, especially near the basket.

There are a few issues with the graph presented above: first, there is no adjustment for the 3 being worth one more point. This is easily correctable: we’ll look at points per shot instead

The graph above looks mostly the same with the differences between open and contested shots better defined. The second issue we have with both graphs is that the sample size on the ends are considerably smaller and it’s particularly clear with altered shots where there were only four altered shots taken at 24 seconds in the shot clock. This is why you see that big nosedive for altered shots at 24 seconds. So let’s fix this issue by creating 5-second bins for each type of shot defense.

The graph is below:

We can see that regardless of shot defense, if you shoot earlier in the shot clock, the PPS goes up. There is also a drastic increase from the 16-19 seconds to 20-24 seconds bin for guarded, open and pressured shots. As I alluded to earlier, it’s likely that many of those shots are occurring close to the basket in transition. So we’ll need to break it down even further by shot location. But before we do that, I think it’s important to note that for altered and contested shots, we still see a steady increase in PPS as you shoot earlier in the shot clock. It’s possible that a lot of the shots in the 20-24 second interval are still in transition but because the shot is being contested, I’d argue a shot in transition is irrelevant. We know contested shots near the basket have a much lower chance of going in.

Before we break down the graphs by shot location, let’s first look at the distribution of shot defense at each second:

Now let’s move onto looking at the shot clock and shot defense with respect to the shot location. As I mentioned earlier, it’s likely that a lot of the guarded, open and pressured shots early in the shot clock were coming near the basket in transition.

So we can remove the shots that were near the basket and look at only mid-range shots and three point shots. This should essentially remove the effects of transition offense since most players attack the basket in transition.

Again, we can see that shooting at the end of the shot clock is not recommended. However, perhaps what is most interesting is that at one second, the chances of making the shot are essentially the same across all levels of shot defense. The sample size is not ideal– about 220+ shot attempts for open and guarded– but it’s large enough that we should feel comfortable drawing some conclusions. If you are wondering why the graph only goes to 23 seconds, it is because I removed shots taken at 24 seconds due to a very small sample size (22 total shots).

Let’s also take a look at the distribution of these shots at each time interval:

Like the first graph, we see that the majority of shots taken from mid-range or three are contested.

Now, let’s look at mid-range shots and threes separately since the value of each shot is significantly different. First, we’ll look at the dreaded mid-range shot. How does FG% vary for mid-range shots over time in the shot clock?

We see that FG%’s decline as the shot clock winds down with the exception of open and guarded shots at one second. However, the reason for this is simply due to a small sample size– less than 100 shot attempts for both open and guarded shots at one second. In fact, we have some sample size issues on both ends of the graph so let’s look at the same graph but with five second binned intervals:

How about the distribution of shots taken at each second

Again, we see that as the shot clock winds down, we see more and more contested shots taken. After looking at this graph, I’m sure you are left wondering how often is the “worst shot” taken? (If you are wondering what the worst shot is, it’s a contested mid-range shot taken with 1-5 seconds remaining) Over the last two years of shots that Vantage has tracked, the “worst shot” was attempted 4% of the time. If we include pressured mid-range shots taken with 1-5 seconds remaining, that number jumps to 5.2%.

Let’s move on to exploring three-point shots and how the FG% varies over the shot clock. Like before, we’ll look at the FG% for the different types of shot defense:

As I mentioned in the previous article, we can see the difference between open and guarded shots versus contested shots. We also see that for pressured shots, there seems to be a pretty high fluctuation from second to second. As I did in a previous graph, I had to remove the 24 second interval as well as some of the values for the 23 second interval due to sample size issues. Let’s fix those issues by looking at the 5-second binned intervals:

This is the first graph where we can’t really see any effect of shooting earlier in the shot clock. We do see that in the 1-5 second bin, FG% is at its lowest. However, there is no trend among any of the other bins. So if a team wants a three, it does not matter when in the shot clock they shoot it. Another interesting conclusion we can draw is that there seems to be a significant difference in the FG% for shots taken in the 1-5 second bin across each level of shot defense. We see that going from a contested three to a guarded three can raise your FG% by about 7% and going from a guarded three to an open three can raise your FG% by 5.5%. So if a shooter is able to get a wide open three within the last five seconds of the shot clock, it will still be very beneficial to the offense. We also see that a guarded three taken in the last five seconds of the shot clock doesn’t have a much higher chance of going in than a pressured or contested three taken earlier in the shot clock.

Let’s look at the distribution of shot defense at each time interval:

Again, contested threes are the most likely shot and the rate of contested shots goes up as the clock winds down. Players are also attempting more open threes with 15-22 seconds remaining on the shot clock.

Finally, let’s look at shots close to the basket. When looking at the FG%, keep in mind that many of the shots early in the clock may come in transition. However, if the level of shot defense is the same, should the shot being in transition really inflate the FG%? I’ll let the reader decide when looking at the graph.

As we’ve done before, let’s look at the distribution of shot defense at each time interval:

Let’s answer some of the questions posed at the beginning of this article.

Is it better to shoot early in the shot clock?
I think the evidence certainly points to this. However, for three point shots, there doesn’t appear to be any advantage for shooting early.

What if the shot is contested, is it still better to shoot early? How does the shot location influence this?
At first glance, it is certainly never a good idea to shoot a contested shot. However, for mid-range shots and threes, there is a cutoff point where contested shots early in the shot clock are basically as good as guarded or open shots late in the shot clock. For mid-range shots, that cutoff appears to be around approximately 10 seconds. For threes, that cutoff point only applies to guarded shots and occurs at around approximately five seconds. Of course, I’m only eyeballing the cutoff point based on the binned graphs so it would be an interesting exercise to determine the exact cut off point. But to answer the question above, it is not better to shoot a contested shot early. However, if you are going to wait for the shot clock to go all the way down, you may as well shoot that contested shot.

We can take this last question one step further and look at contested threes as well. In order to compare the three types of shots, let’s look at our last graph:

Unfortunately, for those clamoring for the mid-range shot to remain a big part of the game, there isn’t much here to support your claim. In fact, the evidence here seems to point to mid-range shots being completely abandoned. Still, it is important to break this down further by each specific shot location. Perhaps there are areas of the mid-range game where shooting an open shot is better than shooting a contested three/close shot. Additionally, each player is going to have different percentages. While the league as a whole should be shooting less mid-range shots, for a specific player, this graph may look much different.

Also, since I mentioned that the league should be shooting less mid-range shots, what exactly does the distribution of shots look like?

As expected, the rate of close shots goes down as defenses are able to set up and protect the basket. We also see the rate of mid-range shots increase till about 15 seconds at which point it levels off at around 40%. Instead, we see the rate of threes increase as the shot clock winds down.

If you have any questions, comments or suggestions, please reach me on twitter @knarsu3